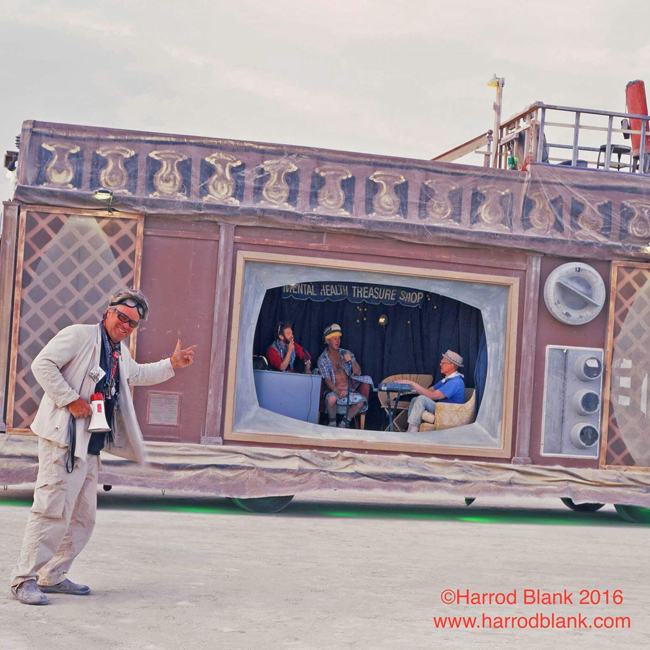 Think back to a simpler time when TV programing was defined affectionately as wholesome. The guest stars were well trained dog and pony shows and the hosts were fun loving blowhards with a penchant for self aggrandizing. The characters could conceivably be plucked from your local talent show, all tarted up for the enjoyment of the masses. Straight from the radio waves of yesteryear, The Mighty Zenith comith!

Nothing could describe better the inspiration and creativity behind our beloved fabricator Steve Knauff, or more commonly known as “sTeVe” (pronounced “Steve-TV”). sTeVe brings you the very platform for every act you ever wanted to perform through an intimate PA system on a relatively intimate set. Handyman, Madman, sTeVe takes pleasure in big art.

Steve’s a longtime collaborator of Lucidity, working tirelessly into the night each year to produce the Lucidity Entrance signs, Stage signs, and of course the iconic Lucid City sign. He perhaps is even more well known for his annual pilgrimage to Burning Man with The Mighty Zenith.

Come linger round his massive television set at Lucidity Festival, and undoubtedly you will get to know this seasoned and soiled burner as he will likely be sitting at the desk of his very own talk show chatting with anyone who joins him on stage for his truly unique manner of creation, and reinvention.

This environment can be found in: